Mammoth Lakes is the gateway to the Sierra’s natural wonders.

Mammoth Lakes is an unparalleled natural wonderland. Yosemite National Park, Devils Postpile and Rainbow Falls National Monument, Mono Lake, Bodie State Historic Park, Ancient Bristlecone Pine Forest, Mt. Whitney and the Mammoth Lakes Basin are all-day trips from town. Not to mention, any activity you participate in will have jaw-dropping scenics that make you feel that you’ve caught a glimpse of the unbelievable.

Situated at the edge of one of the earth’s largest volcanic calderas—second in North America only to Yellowstone—the landscape abounds with spectacular world-class geological features: granite domes, craters, fissures, lava tubes, symmetrical columns of basalt, saline lakes, outcroppings of white quartz and pure black obsidian, warm creeks and natural hot springs pools. The cracked and jagged ribs of the great Sierra Nevada run through it all; the highest range in the Continental U.S. and one of the youngest and most tectonically active mountain ranges on the planet. Sculpted by glaciers and rivers, the flanks of these mountains are now covered in ancient forests of fir and pine. In the high valleys and basins are icy blue lakes and streams populated by frogs and wild trout, and meadows teeming with wildflowers.

Explore the Mammoth Lakes Basin in the Summer 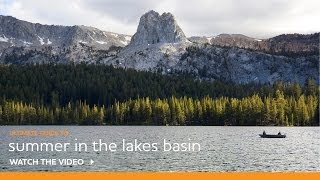 5 Days of Sightseeing in the Eastern Sierra

View the Signature Skyline, the Minarets, for Yourself

Sightseeing at the Inyo Craters

Sightseeing at the Earthquake Fault

Sightseeing at the Mammoth Consolidated Mine

Tips for Stargazing in the Eastern Sierra

Summer Photo Ops That Will Make Your Friends Jealous

From Glaciers to Gondolas: How Mammoth Mountain Got Its Shape

Visiting Mono Lake During the Winter

Winter Photographs That Will Make Your Friends Jealous

Some of the Eastern Sierra’s most dramatic scenery can best be viewed from the water! Explore vast and ancient tufa formations at Mono Lake and kayak to Rush Creek on a guided natural history tour, or rent a kayak and head out on your own. Paddle the Long Valley Caldera… Learn More

Take is 360 degree views of the Sierra Nevada from a gondola as you climb to the top of Mammoth Mountain at 11,053 feet (3,368 m). At the summit, you’ll explore the Eleven53 Interpretive Center with interactive displays on the area’s geologic, hydrologic and volcanic history. Learn More

The Ancient Bristlecone Pine Forest is home to some of the oldest continuously living organisms on earth. The oldest tree, Methuselah, is over 4,700 years old. Bristlecone thrive in the arid environment of the White Mountains near Mammoth Lakes at elevations between 10,000 feet (3,048 m) and 11,000 (3,353 m)…. Learn More

Take in the view from the Scenic Gondola as you climb to the top of Mammoth Mountain at 11,053 feet (3,368 m). At the summit, explore the Eleven53 Interpretive Center, with interactive displays of the area’s geologic, hydrologic and volcanic history. Learn More

In 1877, miners discovered silver and gold deposits on the northern slope of Red Mountain in Mammoth Lakes. Ruins of the Mammoth Consolidated Gold Mine, operated circa 1927-1933., include mining offices, assay office, a cabin, mill, bunkhouses, a school house, mining equipment and mine shafts. Follow an easy dirt trail… Learn More

This saltwater lake is best known for its tufa towers which were formed with the interaction of the salt and the freshwater springs bubbling up from the bottom of the lake. The center has interactive displays that teach about many aspects of the Mono Basin’s geology, ecology, and human history. The… Learn More

This unique geological structure features thousands of hexagonal basalt columns formed 100,000 years ago when lava flow slowed and then cooled and cracked. The area is accessible in summer months, and a mandatory shuttle offers visitors transportation to Devils Postpile and other Reds Meadow areas. Catch the shuttle from the… Learn More

In 1942, the United States government ordered more than 110,000 men, women, and children to leave their homes and detained them in remote, military-style camps. Manzanar War Relocation Center was one of ten camps where Japanese American citizens and resident Japanese aliens were incarcerated during World War II.Extensive exhibits span… Learn More

The award winning Welcome Center and staff is the first step in making the most out of your visit to Mammoth Lakes. Located within the Inyo National Forest, it is operated by the US Forest Service, National Park Service and Mammoth Lakes Tourism which means it’s a one stop shop… Learn More