My Great Love of Mammoth Lakes 

As the year winds down, one (sometimes) local shares her reflections on her love for Mammoth Lakes

It’s an unconventional love story but a beautiful, full-circle tale of first venturing to Mammoth Lakes and why I am now back, currently typing this from Mammoth Coffee Roasting Co.

Let me set the scene…

It’s 2018 and I was living in San Francisco. I had heard whispers about Mammoth Lakes, the seemingly fabled land on the eastern side of the Sierra Nevada Mountains. Hushed voices painted pictures of towering mountain horizons, steaming natural hot springs, and an altitude that makes the night stars feel like they are dangling within reach. Because of those whispers, I added Mammoth Lakes to my “to-go-to list” along with some other California must-sees: the Lost Coast, Lake Tahoe, Mount Shasta, etc…

Then in June of that year one of my close friends and old colleagues, Blane Bachelor, was asked by Mammoth Lakes Tourism to experience and write about Mammoth Lakes. She asked if I wanted to come along and it felt not only like those low-hanging stars would soon be within reach, but that they had aligned for me.

The weekend with Blane ramped up with breakfast at Stellar Brew, hiking to Devil’s Postpile, and dinner at the Whitebark Lounge. With each passing moment, my heart grew with love for Mammoth Lakes. What I couldn’t have expected was that my growing love of Mammoth Lakes  would soon blossom beyond the place and into a person I met on my second night in town.

At the local dive bar, The Clocktower Cellar, Blane and I planned to have one beer and scope out the local scene. We grabbed our draft beers while Mammoth locals played pool and picked songs on the digital jukebox. While Blane and I chatted someone accidentally bumped into me. What was an accidental spill of my beer became the next 7 months of my life.

We’ll leave my clumsy cowboy’s name out of this, but that weekend was the catalyst of enormous change in my life and the start of frequent stints in the Eastern Sierra.

My love for the cowboy grew, and with it so did my love for Mammoth Lakes. Spending nearly every weekend here, and desperately begging my bosses in San Francisco to let me work remotely (pre-covid when this was a much harder ask), I drove the Tioga Pass through Yosemite to cross into a place my heart felt at home. I drove Tioga Pass so often that when I had to purchase a new car in San Francisco, I did so on a Friday morning and that afternoon took her on her maiden voyage back over the pass to Mammoth, and my car got the nickname, Tioga.

Over the summer I ran loops at Convict Lake, explored the trails on Mammoth Mountain, swam in June Lake, played cornhole on Mammoth Brewing Company’s patio, and ate the best Hawaiian food from Ohanas 395.

But as summer turned to fall, my activities changed to leaf peeping by Convict Lake, chilly evenings playing backgammon at Tamarak Lodge, and eventually me learning to ski as an adult on Mammoth Mountain as snowflakes fell and snow accumulated on the mountainside.

With the changing of the season and the chill creeping in, the love between the cowboy and I started to cool as well, but my love for Mammoth kept me warm. I gravitated toward Mammoth over and over again even as the cowboy and I called it quits.

I knew I needed to close the Mammoth chapter of my life at least for a while… And while I tried to reconcile moving on, my heart never left the area. As I drove away I realized that while I had loved the cowboy, he was also a beautiful catalyst for a much deeper love, one for the Eastern Sierra.

The first time I came back after that was in late 2020 and to my surprise, the piece of my heart that I left in Mammoth Lakes was still dancing on the mountaintops and blowing on the breeze. I drove down U.S. 395 into town and I felt like I was home.

I only spent a month in Mammoth, but all of the feelings came rushing back, the kindness of the community, and nature as pristine as a watercolor painting, but as accessible as my backyard. But life and plans were made and while I dragged my feet and begged to linger, my 2020 Mammoth Lakes chapter was short but oh-so-sweet.

But now, I’m back again, staying at the Mammoth Crib and sharing my story for Mammoth Lakes Tourism. The irony is not lost on me and gave me the biggest chuckle when I saw the full circle. Maybe I was never meant to leave Mammoth after that warm June 2018 day while here on my friend’s invitation, maybe I was meant to stay because something keeps bringing me back.

If you’ve been to Mammoth maybe you’ve felt it, too. The deep yearning to plant roots in a place that feels so much like home. I know I’m not alone in feeling the pull toward Mammoth Lakes. Mammoth is magical. It’s what mountain enthusiasts dream about when they close their eyes; the real unreal. 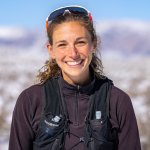 Liz Fieser is a wandering soul with a knack for adventure and a deep sense of curiosity. Currently, Liz calls Squamish, British Columbia, a small mountain town outside of Vancouver, home. When she's not on the trails in Squamish, Liz loves to travel to places that inspire, challenge, and teach her more about the world…