Fly fishing during the winter in the Eastern Sierra is a bit of an enigma. So many things factor into fishing during the summer, but wintertime tends to complicate things even more. One of the most common questions is what bodies of water remain open during the winter? Keep in mind that this can change year over year so it’s always best to check before you go, especially if you haven’t been to a particular place in a while. Regulations can be checked at the California Dept. of Fish and Wildlife website.

Common places to fish in the winter months are Hot Creek, the Owens River above Benton Crossing, the Owens River Gorge, Pleasant Valley Reservoir, and the Lower Owens River in Bishop. These are among a handful of rivers and lakes that remain open year-round. These areas are mostly barbless catch and release waters and prohibit taking any fish with a few exceptions. Again, the regulations are usually posted at access points, but you’ll want to check on the DFW website in case you have plans to keep your catch.

The Importance of Weather

Weather and barometric pressure are usually at the top of the list of concerns for the winter months. If you’ve been to the area before you already know how extreme our winter storms can be. Hot Creek and the Upper Owens are two areas that usually have several feet of snow on the roads used to access them from December through the end of March or even April.

Snowshoes or a snowmobile are required equipment to access some of these areas as well as waders and boots to protect you from wind, snow and frigid water temperatures. It’s not a bad idea to have some half finger wool gloves or some Nitrile gloves to keep your hands dry.

If hiking in the snow isn’t your favorite thing to do, you can drive down to Bishop and fish the Lower Owens, which usually falls in the rain shadow and doesn’t see very much precipitation throughout the winter. It’s usually considerably warmer, which leads to more insect hatches, too.

Perks of Fishing in Winter

So, what’s the big deal about fly fishing in the winter? Mainly that bigger fish tend to be more accessible in the winter months as they tend to move out of frozen bodies of water to head upriver in search of food. Leaving themselves exposed to the fishing public, which normally would have been out of reach during the summer without access to a boat.

You also don’t have to be up before the sun rises, so you can sleep in and fish “banker’s hours” as the fish won’t be active early or late in the day. You can go make a few turns on the mountain and head to the river once things warm up a bit.

What’s Water Temperature Got to Do With It?

Water temperature is critical this time of year, so you’ll want to carry a stream thermometer with you. Trout are cold blooded and will feed in temperatures all the way down into the 30s. They are most active when temperatures are in the mid-50s, but that’ll be hard to find in the middle of winter. If temperature and weather remain stable, the fish will acclimate and feed in the mid-40s, but don’t expect it to last more than a few hours because once that sun goes behind the mountains, you may as well head back to the car.

Insect hatches are as reliant on water temperatures as the fish, so the warmest time of the day usually yields the best hatches. More than likely, you may only see Chironomids or “midges” in the winter months with some BWOs (Blue Winged Olives) on the warmest days if you’re lucky.

You’ll want to be aware of the air temperature when handling your fish because lifting a fish out of the water into freezing air temperatures can freeze tissue in the gills and kill the fish. It’s best to keep the fish in the water for any pictures you might want to take. There’s also the issue of frozen guides on your rod so carrying an antifreeze gel treatment will help the line cast much smoother when it’s below freezing.

I usually will bring a thermos of soup or hot chocolate for my clients on really cold days and a good supply of hand warmers. If you’ve never fished in the winter before it can be a lot of fun with proper planning. The views are unparalleled with endless snow-covered mountains set behind a tranquil stream in the snow. 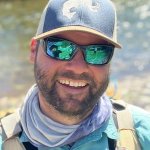 Jim moved to Mammoth Lakes in 2009 and has been a professional guide since 2012. He is a licensed Coast Guard Captain and has been Orvis Endorsed since 2019. Jim started FishMammoth in 2018, and guides almost 200 days a year. When he's not guiding or fishing Jim is still an avid skier and backpacker.

Your Ultimate Guide to Fishing with Kids in Mammoth Lakes