It was trail running’s good fortune when Tim Tollefson found baseball, well, boring. Nothing against America’s pastime, but early on Tollefson knew the game wasn’t for him. “I got bored,” he confessed. “I fell asleep out there.”

Tollefson would later decide to take running the 90-foot distance between bases a lot further. Tollefson, 30, who has been running for the past 17 years, also grew up playing soccer and hockey. However, by the time he was junior in high school, he embraced the running skill set and traded in his skates and cleats for running shoes. Running, he said, plays to his type of motivation. “I enjoy the process, there’s never immediate gratification; it’s something you work at. Often meeting your goals can be years down the line.”

Now, one of running’s newest disciplines, trail running, has earned its own reputation as a major sport in its own right. Turns out that Tollefson, who started out as a marathoner, changed direction again and is on his way to becoming one of Ultra-Trail Running’s top athletes. “Yes, I caved,” he quipped. “I’d always run trails and Mammoth Lakes invites you to run trails. You’re steps from single track or backcountry trails. You can run to Yosemite, 26 miles over the crest, have lunch and take the bus back. It’s a perfect day adventure, if you’re up to it.” These days, his main focus is trying to master the 30 to 50 mile trial distance. “I’d love to become successful at it. I love the technical aspect of it, navigating the terrain, the ascents and descents.” The difference between road and trail racing, he posits, is partly mental. “On road, it’s largely about running a steady pace, zoning out, letting the miles tick by. On trails, you have to be engaged the whole time, watching out for trees, loose rock, and negotiating those ascents and descents. “It’s a challenge when you get fatigued both physically and mentally,” Tollefson said. Splits, he added, are irrelevant, given the ever-changing terrain.

And the switch to Ultra-Trail Running seems to suit him, especially considering he’s only been competing in the sport since last year. “My first trail race was in September, the second in October – both of those were 50k – and then I ran the North Face 50 Mile in December,” he recalled. That race was his first 50-miler, and also his first running for three-plus hours. He finished 8th. “I prepped well, but I also went into it with a respect for the distance,” he noted. “I left some in the tank, but better that than pushing too hard and risking having to drop out or finishing outside the top 20.”

What’s Next for Tim Tollefson?

His next race is the Way Too Cool 50k on Saturday, March 7, after which he’ll turn his attention to training for a pair of races in Europe, having earned a spot on Team USA for the International Association of Ultrarunners (IAU) Ultra Trail World Championships. His first race with the team is in France on May 30. Further down his own life’s trail, Tollefson indicated he’s considering a run at The Western States® 100-Mile Endurance Run, the world’s oldest and most prestigious 100-mile trail race, in Squaw Valley, Calif., near the site of the 1960 Winter Olympics. This year, Tollefson will pace a friend for the last 20 miles, but that’s it.

How does training at altitude affect his performance off the starting line? “There are undeniable benefits,” he stated. “Some of those might be short term, but the big thing is you learn to suffer, to deal with the challenges that make you stronger, not want to give up. When I toe a starting line, I pull from those workouts where I wanted to give up.”

Back to the Future

Meanwhile, he would like to see more trail running events in this area. Inyo County, he pointed out, has a significant trail running community, and there are a few races held in Bishop, Lone Pine and the like. Mammoth Lakes, he thinks, has “the best combo of stuff” for the sport, making it “an ideal training ground.” Tollefson also believes it has an appeal for those in the sport who are in it for the “vibe,” as well as those who like it for its technical aspects. “There’s potential for growth and marketability,” he suggested. Compared to most road races, he thinks it’s more exciting and even TV friendly. “Sort of like the Tour de France,” Tollefson said. “You have all the falls, lead changes, rest stops and those spectacular views. I see that in 5-10 years in the U.S.” Taking a page from June Lake Triathlon Race Director Alana Levin’s book, he also sees himself in a leadership role in creating a world-class Ultra-Trail race for Mammoth Lakes, possibly in the next year or so. “We have what we need to stage one; it would put us on the map.” Keep up with Tim Tollefson on his blog, and follow him on Facebook, and Twitter @TimTollefson. 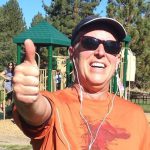 From Central Florida, he started in the film industry in Orlando and later worked in Los Angeles before moving to Mammoth in 2004 for what he and his wife Pamela thought would be a temporary stay. Soon after arriving, however, they decided to call Mammoth home. He started his professional career in Mammoth as a…

Margo Malone on Building a Life & Training in Mammoth Lakes