Marathon Winner from Kenya Trains at The Crib

When an athlete introduces themselves in Swahili, Japanese, and English, you have to wonder what life experience led to such a mix. For elite runner Caroline Rotich, each of these languages marks a different point in her running career.

“In Kenya, I was always running around to places; running to school, running to the store to get Kenyan tea for my mom…even walking two hours to another school to compete [in cross country],” she recalls.

Rotich’s love of running in her home country ultimately earned her a scholarship to Sendai Ikuei Gakuen High School, a prestigious school in Japan.

But for Rotich to fulfill her racing dreams, she needed to make the move to the United States. After moving to Santa Fe, NM in 2009, she won the New York City Half in 2011 and 2013, as well as the Boston Marathon in 2015.

With her sights set on the New York City Marathon on Nov. 6, she decided to add a new weapon to her training arsenal–a stint at The Crib in Mammoth Lakes.

“I’ve been in Santa Fe for more than ten years, and I’ve come to the point when I know all the trails there and wanted a change,” she says.

High Altitude Training at the Crib

Unlike many athletes who stay at The Crib, Rotich is no stranger to high altitude training: Santa Fe sits just over 7000 feet elevation, while Rotich’s home town of Nyahururu, Kenya is 7500 feet above sea level.

For Rotich, the stunning views and endless trails of Mammoth Lakes were really what attracted her.

“When I got here – it was just so beautiful. I don’t even know how I found a place that was this beautiful and had high altitude. I’m so looking forward to breathing easier for New York,” she says. “It feels like home even though I’m far away.”

Part of feeling at home is feeling a sense of community, which Rotich found with the Mammoth Track Club.

She credits the Track Club as the finishing touch for her home away from home: “The training club has been so helpful, running with me and showing me around…everything I need! I’m so thankful.”

When it comes to training for a marathon, nutrition becomes essential. Traditional Kenyan foods are a necessity for Rotich, and that’s not a common cuisine in Mammoth Lakes.

“I brought foods (to Mammoth) that I was pretty sure I wasn’t going to get here, like Kenyan tea. I have to have that. It’s like English tea with milk and sugar,” says Rotich.

On race days, running is the easiest part for her – compared to nutrition.

“Normally I’m not very good at eating and going for runs or eating during runs, but I know that in marathons you have to do that,” she says.

How to Train for a Marathon

For runners and non-runners alike, training for a marathon can seem like a daunting task. Like most large goals, Rotich highlights the importance of breaking runs down into manageable chunks.

“Just get out there and have fun…do whatever will get you to put on your running shoes, even if it’s just a walk. You don’t have to run every day to be a runner. Enjoy the process,” she explains.

This advice doesn’t come from nowhere. Most days, Rotich says, she’s eager to run her miles, while other days she honors the need for rest.

“Don’t force [training]. Sometimes, we try to overdo it, and that makes it so you don’t even want to try again,” she says. “If you’re feeling too tired one day, hey there’s always tomorrow.”

Rotich will be traveling directly from Mammoth Lakes to compete in the New York City Marathon on Nov. 6.

While Rotich has fallen in love with the Mammoth trails, she’s not sure about adding trail races to the schedule. 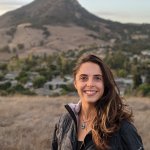 Lauren MacLeod, RD (she/her) is a Mammoth-based sports dietitian specializing in mountain athletes. She works as a food, nutrition, and travel writer for outdoor and wellness brands. Lauren's favorite trail snack is a PB and J and her dream is that no athlete will ever bonk again. You can find her on Instagram at @themountaindietitian…